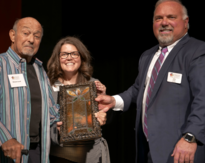 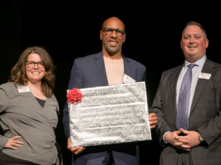 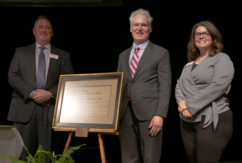 The Mary Jane Palmer Nunlist “I Love Middletown Award”
Mary Jane Palmer Nunlist was a trustee, donor, friend and former board member of the Foundation who grew up in Middletown and graduated from Middletown High School. She was the founder of Palmer Temps which grew into The Palmer Group.  As her business grew, her role in the community grew. She sat on many boards, raised lots of money for good causes, and encouraged women to take leadership positions throughout the community.

Mary Jane’s personality, her generosity and her love for Middletown were legendary.  When she lost her battle to cancer in 2007, family and friends created a fund at the Middletown Community Foundation to memorialize her and recognize others in the community who share her spirit for community. Public nominations are accepted to honor unsung heroes who make significant contributions to the Middletown Area, but who mostly go unthanked for their efforts.

To nominate an outstanding volunteer for either of the two awards above, please send a letter to the attention of Saran Nathan at the Middletown Community Foundation, 300 N. Main St, Suite 300, Middletown, Ohio 45042 explaining why this person should receive the award.  Include the nominee’s address and phone number, a brief description of their volunteer leadership or service, and your name and contact information.  The nomination may also be emailed to sknathan@mcfoundation.org